Please bear with me because this is going to be long.

I wanted to buy a mermaid top to go with my Magictail, since the top that came with the tail did not fit me.  I home-made a bra (that you can see here), but I was not entirely happy with it.  I knew of Raven of Merbella Studios, and had seen lots of beautiful pictures of her tails and tops.  My mother was kind enough to pay for a top for me (as a very anticipated Christmas gift), so I ordered a Seaweed top on August 23rd.  And here the journey begins - the following review you can also see (sans the pictures) at the Mernetwork website.

Article: Seaweed top with netting and pearls
Bought from: Merbella Studios through Etsy.com
Cost: $225 plus shipping ($62.50). Total= $287.50
Rating for the article: 3 stars
Rating for the service: 1 star

I bought this top to use for recreational purposes along with a Magictail whose matching bra did not fit me.

Shopping:
Since I bought the top on Etsy (of which I am a regular user), the purchase was easy. I had to contact Raven so she could fix a shipping price to my location, because I live in Europe, and only shipping to the US was set. I specified my preferences (bra size, color, pearl detailing and black netting) at the time of purchase.

The wait:
When I purchased the top (August 23rd), the listing specified 3 weeks of waiting time before shipping. Knowing that Raven takes her time to deliver, I knew it was going to be more than 3 weeks, but I assumed it would not be more than 2 months. I assumed this because waiting time for tails is usually around 120 days (which is 4 months), but I thought a top would take less than that.
I did not send any emails, as I also know that Raven does not pay much attention to them. While waiting, I learned to look for news about her work in her Facebook page and the forums of Mernetwork. This is how I learned, for example, that she gave more priority to tails than any other thing, and this upsetted me. I would not expect that she drop everything to make my top, but I thought that the way it worked was first come, first served, not the amount of money spent on an order. About a month later, I learned that she was waiting for a late shipment of bras (she did not have my size in stock), so that meant that my top was not even started. Later on she posted on Facebook (October 9th) that her email account had been hacked, and she had lost all her customers emails. She asked that all current customers send her emails with their info and a summary of their orders. She did not need my sending again my info - all she had to do was log in on Etsy and everything was there - but I did anyway. Two times, before I got a response on October 19. Was told they were working of tops for the next two weeks and mine would be ready very soon.

I kept on wating. No news on any of her current orders, nor I got mails of any kind. I waited until November 20 before writing again. On November 25 got a response saying the top would ship that week, and would be notified when it did. I took the mail at heart, and I hoped I would get a shipping notification by the end of the week. It did not happen. I thought maybe she posted the box, but forgot to write. Two weeks later, since the package did not show up, I wrote again (December 5) and got no response.

On December 10 I wrote again, and Raven answered back, saying the top had shipped the week before. I got the top some days later.

The shipping:
Shipping was on December 5, and the package arrived on destination on December 12. The bra came in a shoe-sized box, with air padding under the bra cups and a bit of green paper covering the silicone. The shipping price on the label read $24,15. Since I paid $62,50, there was an overcharge of $38,50 that was unaccounted for - certainly the box did not cost that amount. When I opened the box I found that a hair clip had been included: 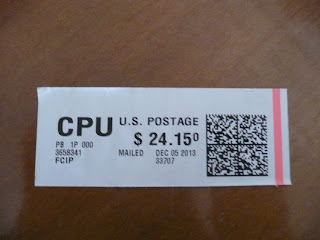 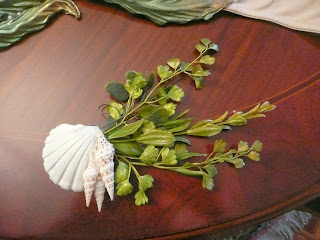 The top itself:
This is the top that I got: 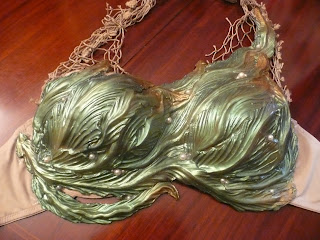 The first thing that struck me after taking it out of the box is that the netting color was crude, when I had requested it in black. How could she had had it wrong after 3 times of me specifying my preferences is beyond my understanding. After a careful inspection, I took notice of some details; the pearls in the listing picture were more abundant, not so in my case (I have 18 pearls exactly); also, some of them had a hole showing: 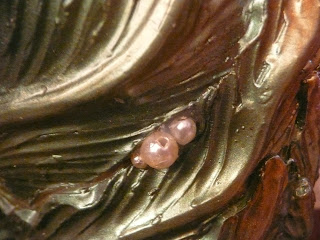 The silicone had not been carefully trimmed in some areas - some of the tips looked like they have a sloppy finishing: 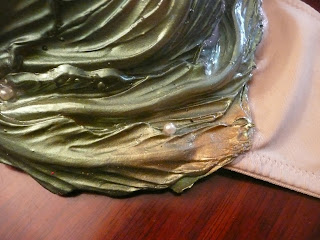 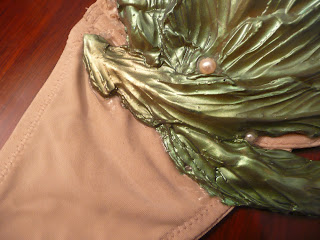 Also, when comparing it with the listing picture, the paint in my bra is bright green, not dark green, and the gold/brown tips are barely visible.

At this point I am thinking maybe I got someone else's top, and she got mine.

Overall impressions: I am disappointed. What I saw on that listing, and what I requested at the time of ordering was not what I got. I had seen endless of positive reviews on her work, but after this purchase I would not trust her to make me a tail that would cost thousands of dollars. Maybe the problem is that I did not spend that amount , but a "mere" $225.

My personal feelings: I have been anxious, and felt ignored throught the whole process. There was no communication on her part that did not begin with me asking for news; no info on the delayed order of bras, no explanation on why my bra has crude netting, not a line saying my order had shipped, not even a sheet explaining how to take care of my bra. I have also felt that I was mislead when I did not get an estimated time for delivery, after the 3 initial weeks had passed. It is not a question of having to wait. It is a question that if I have to wait 4 months, I would have rather known that before hand. I feel my order was not "good enough" or "important enough" to have her full attention. Other tail makers have been largely critized precisely for that, and I never thought I would feel the same way about Raven.

Am I happy with my top? - Not really, but it looks good, and it fits me. At this point, I have to be content with that.
Would I recommend her as a seller? - I don't think so. Certainly not to a nervous and/or anxious person. The thing that I am more upset about is the lack of communication. I believe lack of time is not an excuse, specially when you have the time to post pictures and videos on Facebook. Communication with customers is essential when doing business online. I have worked with other artists that make custom orders, and they were fast and precise about communications, answered questions or concerns within 24 hours, communicated with me when or if there was an issue with my order, and ALWAYS delivered on time. 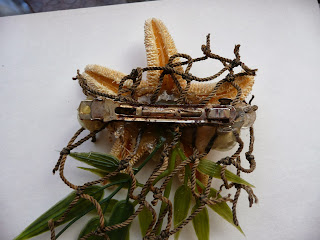 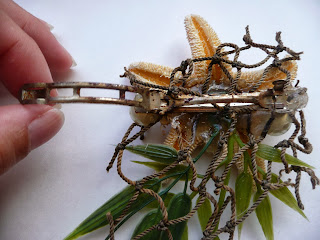 I supposed it was used for a wet photoshoot or something like that.  I have seen the sea water turn something rusty with just one use.  But this is no way to send something to a paying customer.

In any case, I still have not been able to try the top in water, but when I do, I will do an update on that.
Posted by Kaleidoskopic Romance at 7:00 PM

Thanks! At least it got here in one piece and fits :)

What you will find here

Kaleidoskopic Romance
Even though this blog started as a way of sharing my dollhouse and miniature projects, for lack of time I cannot do crafts as much as I want, so this has turned into a mixbag, but there are some things that will always be present: Absinthe, corsets and merchandise. Vampires may come up occasionally, and so will mermaids. Nail art is a new hobby, so it will be around as well. Occasionally I do reviews of stuff that I buy, hoping it will be helpful to someone. I hope you enjoy my little vices with me!

I've been featured by these wonderful people!